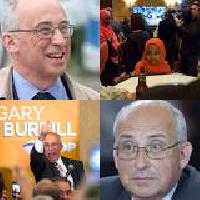 Nova Scotia NDP leader Gary Burrill, celebrates with supporters after winning his seat following the Nova Scotia provincial election in Halifax, N.S. on Tuesday, May 30, 2017. By: Yvette d'Entremont Metro Published on Tue May 30 2017 08:41:00

Metro Halifax: New faces, close races (and some that weren't so close)

It was a simple way for Fatuma Seid to show gratitude to the one party that proved it was looking out for her. She simply showed up at the NDP victory party with her nine-year-old daughter Nadia Abdulaziz. That was enough, Seid said. Just to be inside … . Both have served one one term as MLA, with Burrill serving as MLA in Colchester-Musquodoboit Valley in 2009 before he was unseated by PC MLA Larry Harrison. Burrill became leader of the NDP last year without a seat in the election and opted against

NDP Leader Gary Burrill won his seat, a Liberal cabinet minister went down to defeat in Dartmouth and the Tories made a push in several Halifax-area ridings in Tuesday's provincial election. Community Services Minister Joanne Bernard trailed New. P'Lovers stores have become a familiar landmark in Nova Scotia. The first store was opened in Halifax in 1992 and the name — a play on 'Planet Lovers' and originally derived from Piping Plovers (the small Nova Scotia shore birds which were declared an

Sailors from the USS Eisenhower give back while visiting Halifax